Your Guide to Finding the Best Beginner Telescopes for Kids

Home educators weigh in on the best telescope available for kids.

It's been estimated that there are around 300 billion stars in the Milky Way.

We don't need to tell you how absolutely incredible that is, not least of all because the great Douglas Adams already put it better than we ever could: 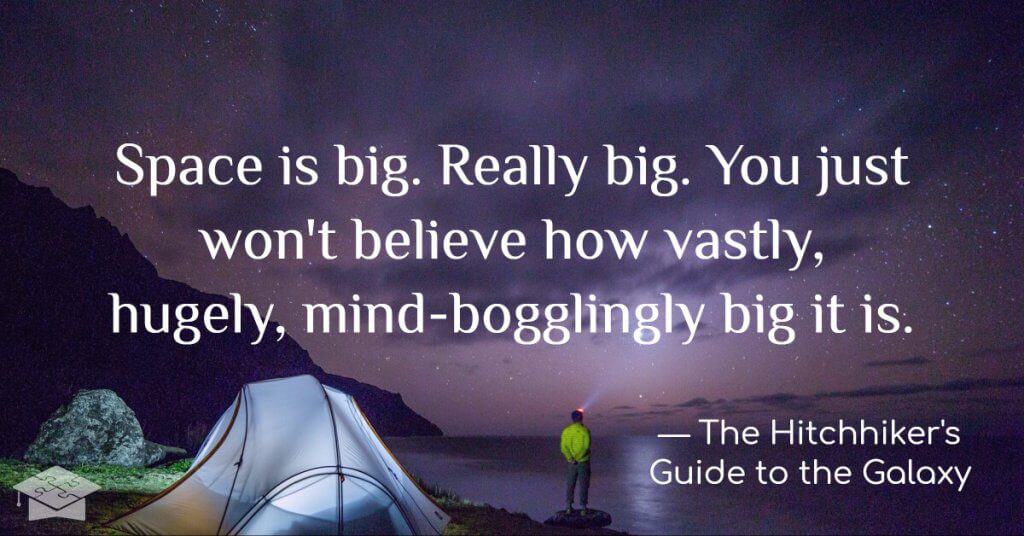 But what happens if that moment occurs when you can't afford a telescope because you're too young to even begin to understand the world of employment?

You ask your parents, of course.

If your child has shown an interest in stargazing – and we mean a serious interest – it may be time to give in and buy them a telescope. Of course, this prospect can seem a little daunting. After all, telescopes are complicated, expensive and fragile, right?

Well... yes, actually. Telescopes are complicated tools – they rarely come cheap and they rarely come designed for children. But that's not to say there aren't any telescopes out there made with value for money and efficiency for beginner's in mind. In this list of the best telescopes for kids, we'll make the case for proper equipment for young stargazers – we hope it will convince you.

A telescope mount that moves both horizontally and vertically, allowing for a greater field of view.

This term refers to the diameter of the objective (in most instances, the lens). The larger the aperture of a telescope, the more light passes through to the eyepiece, and so the more detailed the image you see will be.

The distance between the focus (eyepiece) and the objective. The focal length will have a large effect on the size of the resulting image.

This one is fairly self-explanatory. Magnification simply refers to the amount of times the image is magnified, and is determined by the focal length and the eyepiece of the telescope.

The objective of a telescope simply refers to the part of the device through which light passes – in the instance of a refractor telescope, the lens.

One of the three main types of telescope, the other two being reflectors and compounds. The type of telescope is determined by the type of objective. Reflectors use internal mirrors to, as the name suggests, reflect the light to the eyepiece. Refractors use a glass lens as their objectives, refracting light through to the eyepiece to magnify the image. Compounds use both. For the purpose of this article, we'll be focusing on refractor telescopes, the most widely used and cost-effective form of telescope.

The Best Telescope for Kids

Among the most celebrated telescopes for beginners is this portable creation from Celestron, a company generally considered to be at the top of the (admittedly fairly niche) telescope manufacturing business. It's one of those devices that seems determined to prove size isn't everything – kitted out with an aperture of 70 millimeters and a focal length of 400 millimeters, the images you'll receive through this refractor are as awe-inspiring as they come (at least in terms of most reasonably priced domestic telescopes).

The cost includes the telescope, the tripod, two separate eyepieces, a small backpack designed to contain the telescope, and even a copy of TheSkyX, a sophisticated astronomy software great for those new to the world – or rather, the universe – of stargazing.

Here's why it's worth it:

It may seem a fairly large investment, but it really is one of the best telescopes for kids out there. Let's face it – to get a professional quality child's telescope, all the necessary accessories and even a software allowing for access to an enormous database of sky maps and other useful features for under 100 bucks (usually, prices are always subject to change) is a pretty amazing deal. If you still feel you'd like to avoid spending too much in case your child's stargazing interest turns out to be nothing more than a phase, it's worth noting Celestron also offer a 50 mm Travel Scope (a slightly less advanced version of the 70mm, including many of the same features without TheSkyX software) for a lower price-point. 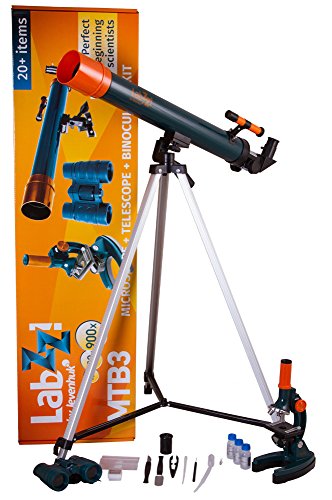 Yes, we know what you're thinking – you came here looking for a decent value telescope, and now we're pushing microscopes and binoculars your way too.

However, we can't ignore the fact that Levenhuk's science kit includes a pretty fantastic child's telescope – a refractor complete with a 50mm aperture and 600mm focal length, 5mm and 10mm eyepieces, 2 optical finders and an aluminum tripod, allowing for up to 120x magnification power.

The images you'll get here are pretty clear, if not as breathtaking as the ones you'll get with a more advanced model like the Celestron Travel Scope. And it's been argued that what this Levenhuk telescope lacks in technical sophistication, it more than compensates for in its age appropriateness, with adjustments to height and focus simple and easy to make, and a sturdy frame that should be able to withstand a few accidents.

For kids, binoculars are great for stargazing

Though it may not be binoculars you're specifically looking for, it's worth getting a pair if your child is interested in astronomy. Essentially a much more portable telescope, they're great tools for stargazing on the move, and the pair included in the Levenhuk set are a decent place to start. The binoculars that come with the set include a 30 mm aperture, a storage pouch, a carrying strap and a microfiber cleaning cloth for the lens – it's fairly comprehensive, to say the least. Though it's obviously not as powerful as the telescope, it's a great addition to your kid's astronomy set – small, light, and with a low (but not too low) magnification rate to avoid the risk of causing eye strain.

The microscope, though it's not exactly an important astronomy tool, is also worth having – if your kid is taking an interest in science, it's hardly inconceivable they'll become intrigued by microbiology at some point. And with this particular piece of equipment, capable of up to 900x magnification, it seems like an added bonus, giving you the opportunity to explore the world beneath our feet as well as the universe above our skies.

And check the price, when this review was first published this kit was the best value for the money. A fantastic introduction to the practice of astronomy, it's safe, sturdy and spectacular for science and stargazing.[/product]

This refractor comes in a variety of apertures, from 60mm to 102mm. For the purpose of cost-effectiveness, we'll be talking about the 60mm telescope here.

Similarly to the Celestron Travel Telescope, this Meade invention comes with software providing users with access to star maps and astronomical guidance, making it an excellent piece of equipment for beginners who really want to get a grasp of how the field works. There's even an instructional DVD for kids who want to get to the real intricacies of the telescope.

Though it falls behind the Celestron Telescope in its aperture, it's superior in its focal length (800mm) and its technological features. An altazimuth mount gives you complete control over the direction of the telescope, while slow-motion controls and even a red dot viewfinder give you the ability to effectively track objects.

This probably sounds like something of an overcomplicated telescope to give an enthusiastic kid, but with a little supervision and a lot of practice, this could be the telescope to last your child through the years. At just under $50, it's an advanced, effective, and genuinely great value piece of equipment that could provide the perfect companion to your child's stargazing ambitions. 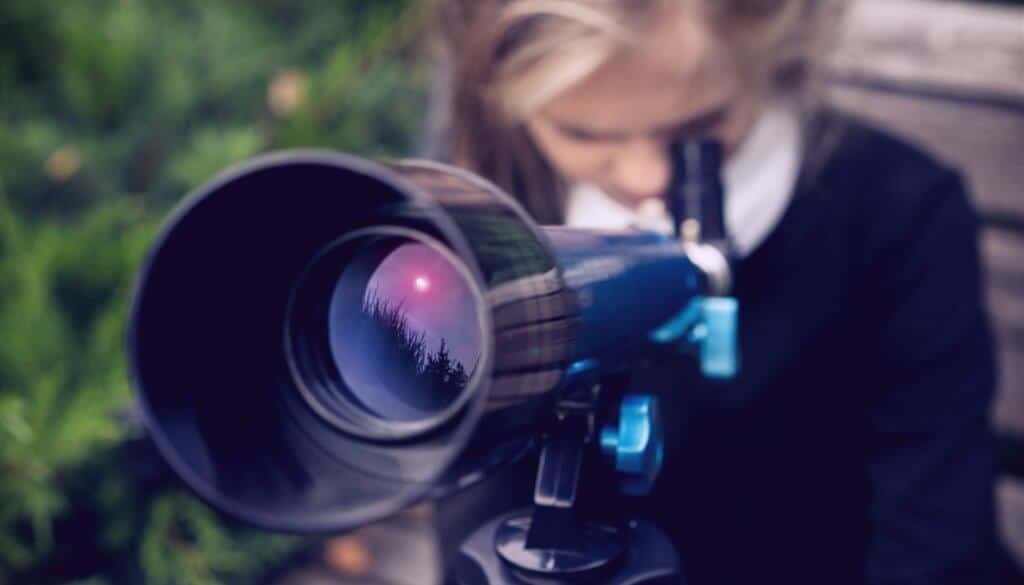 Some libraries will let you check out telescopes, microscopes, and all sorts of stuff. Definitely start by calling your local library! You can also check if there is a local astronomy club in your area. There is one near my house and they meet at a park. Anyone can go and they'll share their telescopes and show things to you in the sky.

Also check for a local planetarium, they often have fun night sky classes!

A good telescope for kids at an affordable price may seem like something of a pipe dream at first – after all, a telescope is a complicated piece of equipment, and finding a quality one for adults is difficult enough.

But astronomy doesn't need to be overpriced, and it certainly doesn't need to be exclusively for adults. As Douglas Adams said, space is big – really big. With a quality range of telescopes developed for beginners at great prices, your kids can happily pursue the enormous world of the stars in all its cosmic glory.

Space is big. Really big. You just won't believe how vastly, hugely, mind-bogglingly big it is.

— The Hitchhiker's Guide to the Galaxy [source]