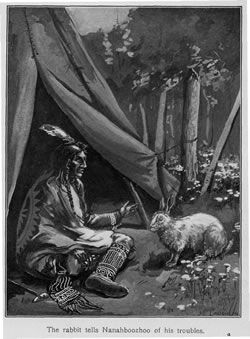 For thirty years or more we have been gathering up these myths and legends. Sometimes a brief sentence or two of one would be heard in some wigwam—just enough to excite curiosity—then years would elapse ere the whole story could be secured. As the tribes had no written language, and the Indians had to depend entirely upon their memory, it is not to be wondered at that there were, at times, great divergences in the recital of even the most familiar of their stories. We have heard the same legend given by several story-tellers and no two agreed in many particulars. Others, however, were told with very slight differences.

A collection of fables and myths by the Algonquin Indians. Fascinating tales such as:

There is a great introduction that tells how the stories were collected over the years.

The illustrations are small, but very detailed.