A one-stop resource for finding the graphing calculator you need.

Maybe you need a better grade in math class? Maybe your new curriculum requires a graphing calculator? Maybe your old TI-83 finally broke on the job and you need a shiny new calculator for your work?

No matter the reason, I’ve designed this guide to help you pick out the best graphing calculator for your needs. I identified three main groups of people that need graphing calculators–students, teachers, professionals–and will try to provide useful info for all of you.


If you’ve read a calculator review that talks about the wonderful innovations and improvements in graphing calculator technology, they might actually be telling the truth. Five years ago, I would have laughed in your face. The graphing calculator market stayed largely unchanged for 20+ years–more on that later–but the most recent calculators have seriously impressed me!

Picking out the Best Graphing Calculator for Your Needs

Graphing calculator model names may be numerous and confusing, but there aren’t that many brands to choose from.

Calculator brand diversity is as follows:

This is a distinction that confuses a lot of readers during their research, so I want to clear it up quickly in the beginning.

CAS stands for computer algebra system, a software that allows the calculator to manipulate mathematical expressions in symbolic form like humans do manually. When you compare two calculators, one CAS calculator and one non-CAS, the main difference is the CAS calculator’s ability to deal with symbolic manipulations and produce a symbolic result (an equation). Non-CAS calculators must deal with equations numerically and will return decimal or fractional results.

A CAS calculator can factor, expand, and simplify an equation. The key benefit is that a CAS can work with exact forms. While some collegiate studies might need a CAS calculator, this machine is most beneficial to professionals and researchers that encounter symbolic expressions very frequently.

Examples of problems a CAS calculator can solve

A calculator with a computer algebra system will be able to solve the problems listed below:

Pros and Cons of CAS Calculators

Don’t show work: Teacher’s want students to show their work. CAS calculators have capabilities that can essentially allow a student to do no work at all.

More frequently banned: Some teachers and certain tests do not allow CAS calculators to be used during exams. Nevertheless, the United State’s College Board allows most CAS calculators on the SAT and AP tests. For instance, the TI-Nspire CAS is an approved device. The ACT banned CAS calculators.

Faster and more powerful: It is easy to check solutions to complex math problems that would normally require tedious pen and paper work.

Big SAT advantages: Students who have mastered using a CAS calculator will save time and perform higher on the SAT.

Better illustrations: The calculator display and input looks like the equations students see on paper.

For students, buying calculators is like buying new clothes as a child. You will outgrow your old calculator at various levels of your education. For instance, a TI-83 might be the perfect calculator for pre-algebra, algebra, and trigonometry. However, this calculator may not translate well into college academics. If you want to make a single graphing calculator purchase, pay close attention to the machine’s features and capabilities.

TI calculators tend to have extremely long lives. It is not unusual for TI-83’s/TI-84’s to last for 15-20 years with proper care.

Before purchasing a new calculator, check that the device is allowed in classrooms, tests, or universities where you plan to use it.

I do not envy the public school teachers that are assigned to teach a class full of students how to use TI calculators! Luckily, TI offers lots of resources for the classroom including pre-planned lessons and simplified materials.

Features to Keep in Mind When Choosing a Graphing Calculator

Ignoring the calculator’s mathematical computing abilities, there are a handful of product characteristics and features that made an impact on my product assessments.

From other brands: HP 50g, HP Prime, Casio FX-CP400, and the Casio ClassPad 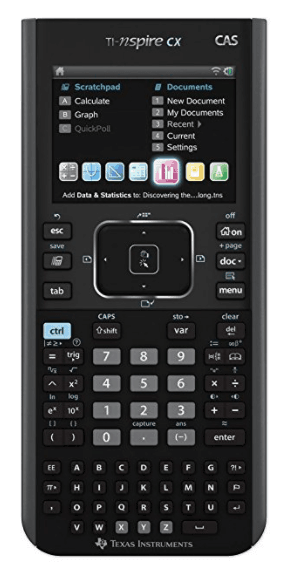 Eight years ago, I first picked up my first Nspire. I thought I was holding a crude medieval weapon. The screen bulged outside of the clunky keypad and the display was a dull black and white. The Nspire was a flop in the early days.

This calculator has finally lived up to its name.

The interface is like no graphing calculator you’ve ever used.

The TI-Nspire uses a more intuitive and interactive interface than any other TI calculator. With drop-down menus, multiple tabs, draggable interactivity, and a folder system like windows, the Nspire makes sense to the younger generation. While some calculators feel “programmy,” the Nspire genuinely feels like you’re using a mini computer.

When inputting problems and functions, the Nspire makes it easy to use mathematical symbols so that the equation on the screen looks just like the problem on paper.

What are dynamic properties? Let’s say you have multiple tabs/screens up on your Nspire. One screen contains the graphed function. Another holds a table of values. Finally, the equation itself is on a third screen. When you drag and manipulate the graph, the values in the other windows update automatically accordingly to the new shape.

This isn’t a calculator you’re going to outgrow

Owners of the TI-83 series might eventually want a calculator with more advanced functionality. I don’t foresee any TI-Nspire users encountering this problem. Every model of the Nspire has a large library of advanced calc and diffy q (Differential Equations) capabilities.

Models of the TI-Nspire

High school students that know they will take the SAT and/or AP Calculus will love and benefit from the TI-Nspire CX CAS. ACT students will need to use the TI-Nspire CX because the CAS model can’t be used during the test.

They are both really similar.

Both the hardware and internal software of the TI-Nspire CX and TI-Nspire CX CAS look nearly the same. After using them both for quite some time, you’ll eventually discover some menus and submenus that only the CAS edition has.

Conclusion: Well Worth the Money

Best of all, students learn calculator features way faster on the Nspire than on TI-83/TI-84. This includes students that are not pursuing higher education in mathematics. The Nspire easily accommodates both remedial high school students and graduate level mathematics students.

Having just raved about the TI-Nspire CX CAS, it is the clear favorite from Texas Instruments. The TI-89 Titanium is Texas Instrument’s other most popular CAS model. In the early days of the Nspire, the Titanium was still TI’s top CAS option. But a complete lack of updates to the TI-89 after 2005 and consistent Nspire CAS updates allowed the Nspire to surpass the TI-89 Titanium.

But Texas Instruments isn’t the only company that makes excellent CAS calculators.

The HP 50G and the HP Prime

I’ll make this short and sweet.

The HP 50G is basically a budget alternative to the TI-89 Titanium. There is hardly any difference in functionality between the two, and you’ll usually pay a good chunk less for the 50G.

The HP Prime is HP’s newest and most advanced calculator, hands down. It has a touch-screen, great color, and was clearly designed for teachers and students.

I’ll be blunt, coming out of the trenches of the education community the rule of thumb is that Casio's won’t equal TI or HP in actual computational features or abilities. Casio is known for making quality hardware. But the same is also true of TI and HP.

The TI-84 is never going to lose its usefulness and is the most common calculator choice for all calculus and pre-calculus courses.

If you’re scanning through online listings, you will notice multiple editions: “TI-84 Plus Silver Edition” and “TI-84 Plus C Silver Edition.” Oversimplifying the differences, these models add additional memory and a colored screen. If price is a serious concern, I would suggest hunting for a used TI-84. The price differences between the most recently updated TI-84 Plus CE and older 84’s is quite small.

The TI-84 Plus CE is thin and light, boasts a color screen, and runs on a battery that lasts for months without needing charging. My jaw literally dropped when I played with the Plus CE for the first time. I was expecting a minimal upgrade to the old, black and white, clunky TI-84 I bought several years ago for my oldest son.

The new 84 even graphs over images! It is worth the few bucks for an upgrade!

Reasons to buy an 84

All TI-84s can be used on ISTEP, ECA, SAT, ACT, and AP Tests. Furthermore, the TI-84 is almost universally accepted as a staple calculator in universities and high schools. I personally know B.A. Mathematics graduates that never used anything else throughout college. Finally, there is almost zero risk of a professor or teacher taking issue with your device.

I firmly believe all math teachers should own a handful of calculators. In addition to owning a TI-84, I would highly suggest the TI-Nspire. It is the way of the future. This is the platform Texas Instruments is focusing on. Texas Instruments has developed the Nspire software and support into the most complete platform available for teachers (and students) of mathematics at all levels.

Why Are Graphing Calculators So Darn Expensive?

That is the same year Google was born. Back in 1996, every mobile phone had an antenna, the Web’s user base finally surpassed France, the first Palm Pilot was released, and Hotmail became a thing.

It took another 5 years before the first iPod was released.

That iPod evolved. It became smaller, sleeker, more powerful, and eventually became archaic and was discontinued. It has been over 20 years, and the TI-83 can still be found in every school across the country. Not only is it outdated, it is still expensive!

Texas Instruments has an unbelievable monopoly on K12 mathematics. It is hard to find current data, but back in 2014 TI produced 93% of all calculators in the U.S. The other full 7% was taken by Casio.

The most iconic graphing calculators

I used a TI-83 back in the day, and I’m still amazed they are for sale and present across the country. The TI-83 was Texas Instrument’s first huge success. However, today the most iconic and popular graphing calculator is the TI-84.

Versions of the TI-84

Graphing Calculators and the SAT

Proficiency with a graphing calculator is an essential skill required for achieving a top SAT score. Because the SAT is a timed test, students simply don’t have enough time to solve every problem without utilizing a calculator to cut down on computation time.

Although you would be at an incredible disadvantage if you didn’t use a calculator on the test, in the words of Dean Dad, “calculators are only as precise as the numbers you put in.”

There are two common questions about calculators and the SAT: What is banned, and what isn’t?

The SAT College Board banned all calculators that have the following features:

This leaves almost all calculators as fair game. The SAT is more lenient than any other standard testing organization.

Acceptable Calculators For the SAT

The College Board explicitly approved the following calculators.

I'll admit it, this guide has been a bit dry and boring! How about some awesome Texas Instrument calculator art!?

Ah, the beauty of boredom in public schools. 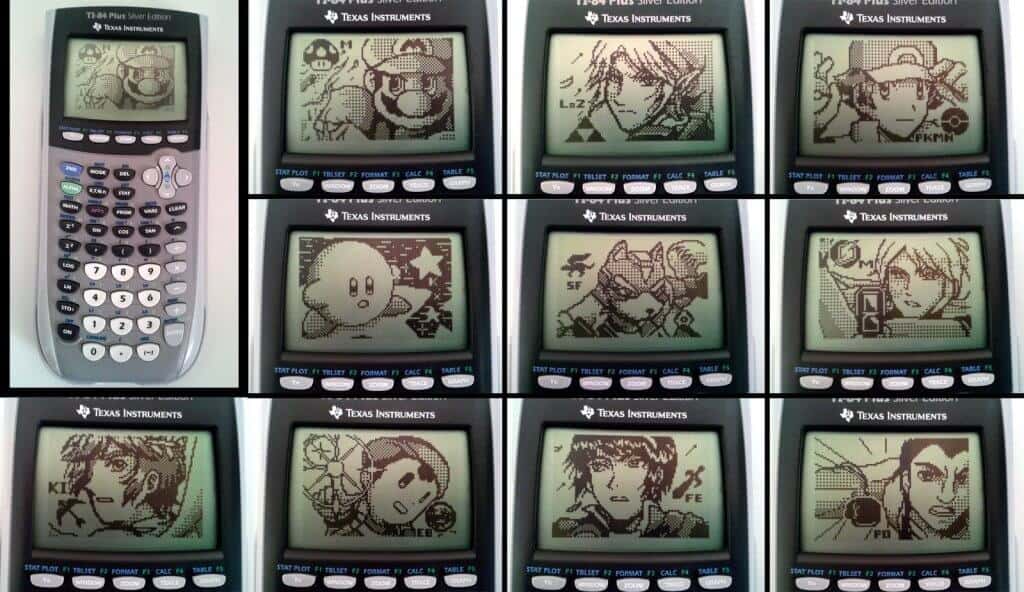