Home » Articles & Blogs » Homeschoolers Poll: Do you give your kids a flu shot?

Homeschoolers Poll: Do you give your kids a flu shot?

Posted in Lifestyle, Parenting on September 19, 2017 - by Unschooling Mom 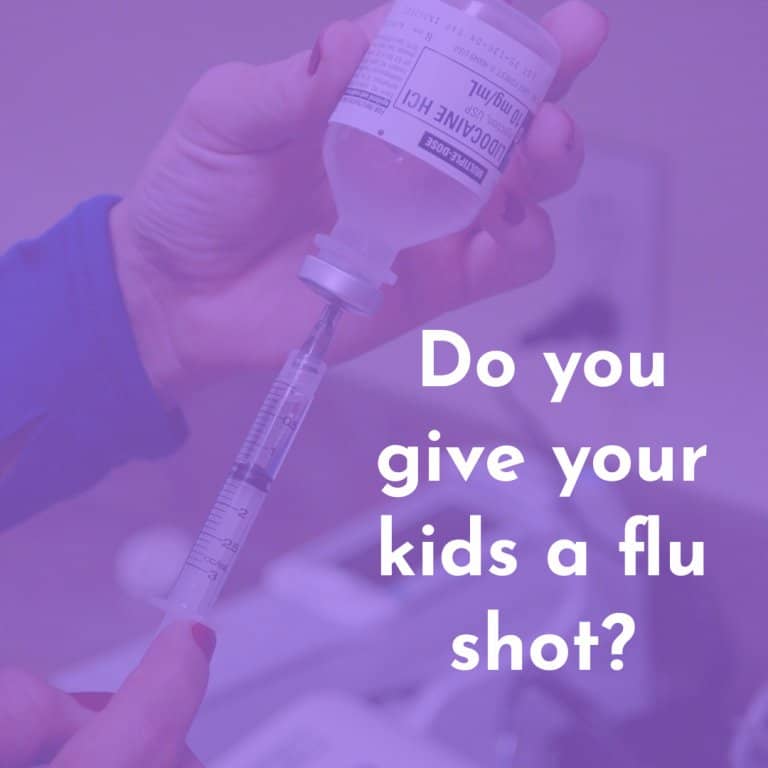 Its that time of year again! Discussions about vaccines, specifically the flue shot, are running rampant across Facebook, Twitter, and personal circles.

So I thought I would gather up what I've found to be the most insightful comments from some Christian homeschooling mothers. For privacy purposes I'm not including profile photos or names and will be removing personal information and specific wording.

1. Use Oils and Supplements Instead

Our pediatrician said the kids would more than likely be fine without it since they all stay home. She wanted my husband and I to get one but we both work from home and actively support our immune systems with oils and supplements so we didn't.

We apply and diffuse oils that have antibacterial/antiviral constituents like Thieves and Oregano. For supplements we use NingXia Red which is full of antioxidants to fight free radicals, and Super C (vitamin C). If we feel like we might be coming down with something we'll double up on the oils and take a supplement called Immupro. We haven't gotten seriously sick (more than a mild cold or runny nose) in three years. We've also cut back on dairy and sugar and that seems to help too.

Another essential oil mom said she saw benefits from rubbing Thieves on the feet each night to help support the immune system.

2. Watch out for the Mercury

Their argument is that the flu vaccination still contains mercury which can have extremely dangerous side effects with very little accuracy. And yes, even the shots that claim to not have any Mercury actually do... if it's under a certain amount, they claim it as trace amounts.

There's also a lot of aluminium in them, which is NOT good for the brain.

Just like I wouldn't give my children trace amounts of rat poisoning, I would not give them trace amounts of a known neurotoxin. A great movie that exposes the serious dangers of allowing little bits of tons in our systems is called Trace Amounts.

The flu shot is also link to increase numbers of miscarriages. It's never been tested safe for pregnant women.

3. Meh. We Still End Up Getting the Flu

I was surprised at how many parents voiced semi-neutral opinions about the shot itself, but harshly criticized the effectiveness.

Voice #1: The sad truth is that even when we do get the shot, we always ended up getting the flu anyways so now we just focus on keeping clean and trying not to catch germs. I never liked injecting them with it anyways.

Voice #2: We don't, I'm not necessarily anti-vaccine but have never seen a reason for those extra chemicals every year. We have only had the flu once and it was that nasty h1n1 in 2009 that they didn't have a vaccine for anyway.

This comment seriously surprised me, especially since it appeared in an explicitly Christian group.

"I work in healthcare and don't get the flu shot (it's really pushed hard on us but I opt out and wear a mask whenever I'm in a patients room) and my kids have never gotten it. I'm very pro vax but I always skip this one."

5. Opinion from an Emergency Responder

After reading over 500 comments, the clear consensus is that anti-vaxxers are (unsuprisingly) extremely anti-flu shot. It did surprise me a bit to see so many pro-vax families coming out against the flu shot.

"My husband and I are both emergency first responders so everyone in my home stays up to date on all vaccines, just for the added security it gives us. But as previous commenters have said, the flu vaccine is a guess on what strain will be prevalent, so it's hit or miss."

Here's another report relating to the opinion of a medical professional:

"I haven't had one in years. I actually had a doctor (a very mainstream medicine doctor, as a matter of fact) tell me that they would cause more harm than good, even if they kept me from getting the flu. However, I also have autoimmune encephalitis, so that might not be her suggestion for everyone. I never have to get one because I have a medical exemption."

6. Google Search the Chemicals Yourself

The best advice always requires you to do a bit of leg work. In my opinion, and as a homeschooler, I'm all about discovering knowledge on our own.

Google what Thiomersal, Polysorbate 80, and Canine Kidney cells, and these other ingredients do to us when injected.

Please do your homework and look what's in the flu shot. My answer to your question is be informed.
I to work in the medical field. I once thought it was a good thing then I researched it and have decided that it's not for our family. And we are so much more healthy for it.

Anything that could have side effects should be a choice.

7. We Stopped After We Saw A Correlation with Pneumonia

"No not since we figured out I kept getting pneumonia from it now my daughter and I don't get it. We get all other vaccines though. Every year they eventually come out and say the flu shot made this year isn't effective for the strains that are active so I'm done with the flu shot."