Home » Articles & Blogs » Finding the Planets with your Telescope

Finding the Planets with your Telescope

Posted in Homeschooling on July 9, 2017 - by Lauri Kubuitsile 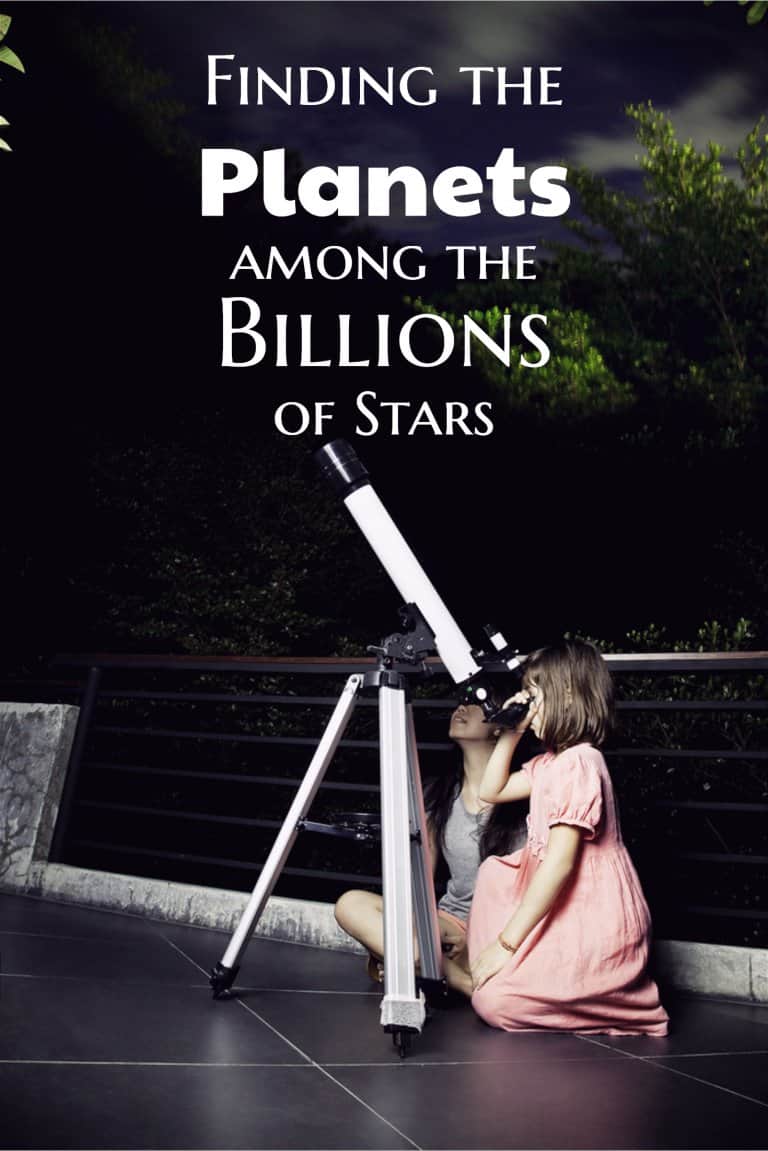 After spending time studying the Moon, the next easiest heavenly bodies to find in the night sky are the planets in our solar system. Using your new telescope (or in many cases even a pair of binoculars will work just fine) to find the planets will truly bring home how far away they are compared to the Moon.

But don’t be disappointed, you can still find some of the planets, and no one can deny the excitement of seeing the rings of Saturn or the gorgeous swirling bands of color on Jupiter through your very own telescope. The brightest planets, Mercury, Saturn, Mars, Venus, and Jupiter, can usually be found without too much effort. Not all planets will be seen every night, though.

Interested in purchasing your very own telescope? Make sure to read our review of the best telescopes for kids and beginners.

Finding the Planets among the Billions of Stars

One way to distinguish between planets and stars is that planets, which are orbiting the Sun, move to a slightly different position each night. Stars do not. Also, usually planets are brighter than stars and don’t twinkle as stars appear to do. Planets are generally easier to be seen around sunset.

You should also learn the apparition periods of the planets. Apparition period is the time that the planet, or any heavenly body in the night sky, will be visible throughout the year. Some planets are only visible for a few weeks, others for a year or more.

To see which planets are out on any particular night and the positions in the sky where you live, it’s a good idea to visit websites such as this one, to see what’s on show for your evening’s entertainment.

Let’s get a few facts about the planets you’ll be observing tonight.

Mars is the second smallest planet and is the fourth from the Sun. The first spacecraft to land on Mars was Mariner 4 in 1965. Humans have always felt a strong affinity for the red planet, and even as you read this, manned expeditions to Mars are in the pipeline, the one at NASA is planned for some time in the 2030s which will involve orbiting the planet.

Mars has water at the polar ice caps only, but the water is substantial. Scientists have estimated if the south pole ice cap melted, it would cover the entire planet with water to the depth of 36 feet (11km). There is no water outside of the poles, though, because the atmosphere is so thin it simply escapes into space.

When looking for Mars in the night sky, it will appear very red especially when it is near a star and it moves quite fast. You can often see Mars best in the early morning.

Saturn is the sixth planet from the Sun and is one of the gaseous planets. Like Jupiter, it is primarily made of hydrogen and helium gas, below that is a layer of hydrogen liquid which covers a molten rocky core. Galileo first observed Saturn in 1610. Saturn is probably the most recognizable planet because of its spectacular colored rings made primarily of ice and rock.

Saturn is the farthest planet from Earth that can still be seen with the naked eye. Despite its existence being known for centuries, it still holds many mysteries for scientists.

Saturn is a very hot planet and radiates out more heat than it receives from the sun. It has more than 53 moons with some of the oddest behavior and environments in the universe. Titan, the second largest moon in the galaxy, is so large its gravitational field controls nearby smaller moons. The moon Pan is located within the rings and sweeps out material in its path and creates a space in the rings known as the Encke Gap.

It is unlikely you will be able to see Saturn’s rings with binoculars, you will need a telescope. In the night sky, Saturn will appear yellowish-white to gold in color and it appears flattened.

Jupiter is huge. It is twice as massive as all of the other planets combined. Jupiter is one of the gaseous planets, so not a lot is known about its surface since the gas layer goes down to about 93 miles (150 kms). It is theorized that at its core is a rocky center probably 10-15 times the size of Earth.

The gases that Jupiter is made of are in distinct bands that blow in opposing directions by strong winds causing its beautiful banded appearance. It is suspected that the beautiful appearance of the bands is caused by minor chemical reactions with sulfur compounds which can produce a wide array of colors.

One trick to help you find Jupiter is to look for the Galilean Satellites, four of Jupiter’s 67 known moons. They will appear as four bright points of light around the planet, lights that will also be moving as they orbit Jupiter. Jupiter is located far from the Sun all of the time. You should be able to see Jupiter’s Great Red Spot, a massive hurricane on its surface twice the size of Earth.

Venus is the brightest body in the sky after the Sun and the Moon. Venus’ orbit and rotation on its axis are the same, like the moon, so it always shows the same side to Earth, but it spins slowly and in the opposite direction to Earth. Venus has a very dense atmosphere which creates an extreme greenhouse effect making it much hotter than Mercury even though Mercury is nearer to the Sun.

Since Venus is orbiting between Earth and the Sun, when it passes near to the Sun (both a few days before and after) it will appear in the sky from Earth as a crescent shape, much like the Moon during certain phases. Venus is brilliant when found, much brighter than other nearby stars, and is silver in color.

Mercury is the Roman god of travel, and it is thought Mercury got its names because it moves so fast across our sky. Mercury is the innermost planet and circles the Sun in a mere 88 days.

Even though Mercury is practically racing around the Sun, it’s moving glacially on its own axis. It only rotates on its axis once every two orbits around the Sun. That means it takes 176 Earth days (two Mercuric years) for the sun to rise and set once on Mercury.

Like Venus, Mercury is also located between the Earth and the Sun and will at certain times appear crescent-shaped. Mercury is yellowish and, unlike other planets, appears to twinkle. It is best seen in the morning and evening.