My 16-Year-Old's Response To Hillary Versus Trump On Homeschooling

Posted in Homeschooling on October 18, 2016 - by Mike Holiday 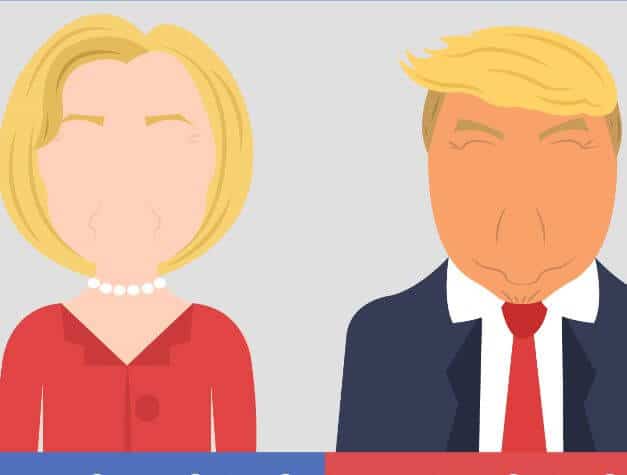 With the 2016 presidential election in full swing, I've been encouraging as much political discussion in our house as I can. I've done my best to be as objective as possible and really encourage research, fact checks, and critical thinking.

My oldest son is particularly intuitive and within a week of political discussion, he asked about homeschooling specifically.

Dad, which canidate is going to be better for homeschoolers?

What a great opportunity for a research project! These are the results of my oldest's research (this past week). 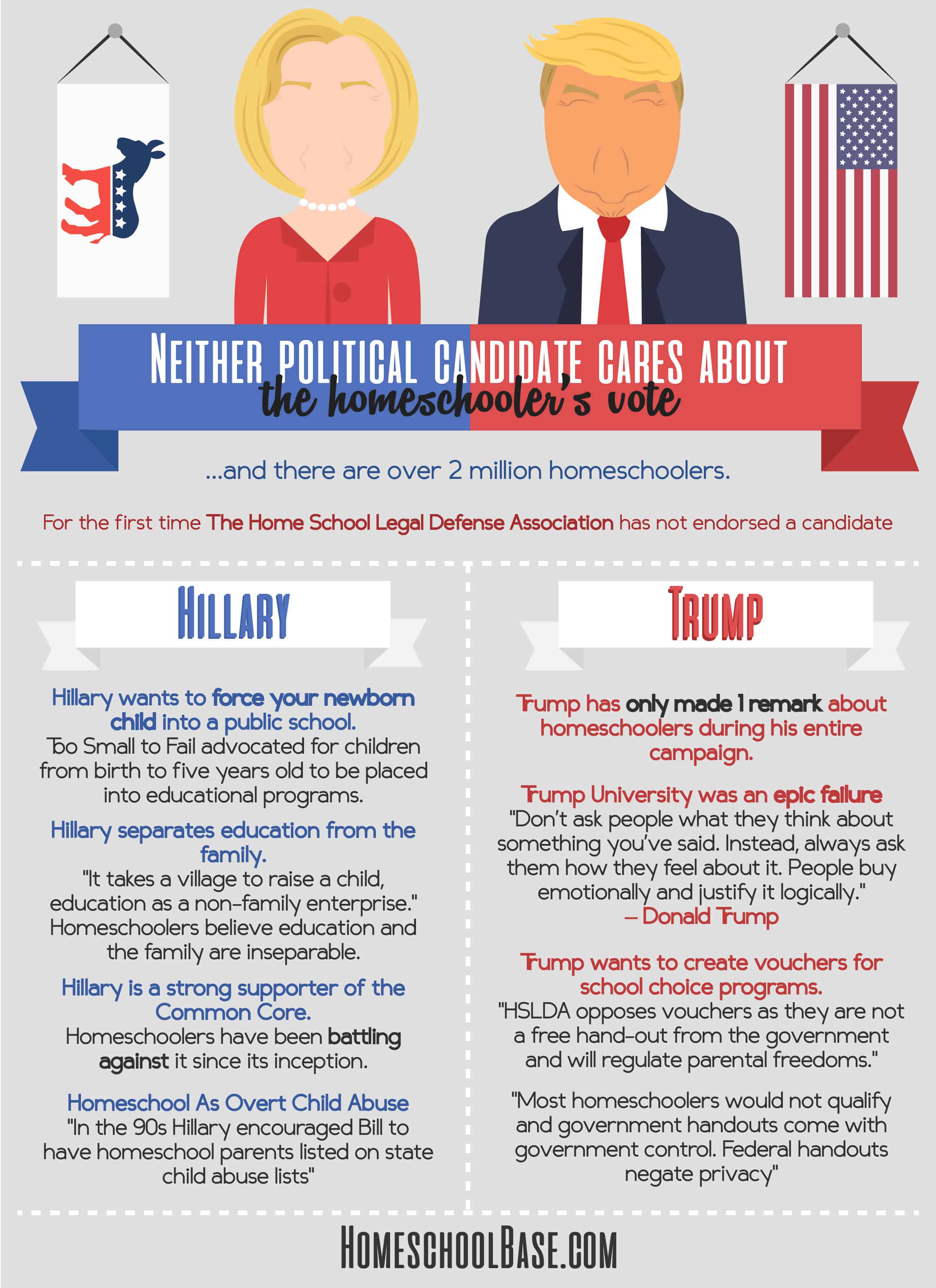 Hillary Clinton on homeschooling and education

Hillary separates education from the family. At a roundtable Hilary said:

“How did we end up at a point where we are so negative about the most important non-family enterprise in the raising of the next generation, which is, how our kids are educated?”

Many homeschoolers, of course, find these two things inseparable.

Hillary wants to promote schooling to children from birth to age 5. She wants more federal involvement and in 2008 supported a $10 billion pre-k program. In her book, It Takes a Village, she wrote that,

"The case for quality early education and programs like Head Start is stronger than ever, and we should be expanding them."

Her 2013 initiative Too Small to Fail advocated that children from age birth should be required to attend school.

Clinton's book, It Takes a Village, on Amazon.com.

Hillary is a strong supporter of the Common Core. Clinton claims that she has always supported national standards. Link to Hillary talking to the Newsday editorial board.

"When I think about the really unfortunate argument that’s been going on around Common Core, it’s very painful, because the Common Core started off as a bi-partisan effort — it was actually nonpartisan." ...

"I was a senator and voted for Leave No Child Behind (sic) because I thought every child should matter and it shouldn’t be you’re poor or you have disabilities so we will sweep you to the back, don’t show up on test days so we don’t want to mess up our scores. No, every child should have the same opportunity. And so I think we have got to get back to basics and we have to look to teachers to lead the way on that."

Hillary says to read to young kids 20-30 minutes daily. Not too terribly important to the election, but an interesting insight we learned. Hillary talks a lot about education in general. For instance, she said that arts education is needed in our schools. Much more info is available here.

Source: Recognizing the Power of the Arts in Education Speech , Sep 17, 1998.

Donald Trump on homeschooling and education

What became clear about Trump's stance is that he doesn't have much of a stance. The only words he has spoken that address homeschoolers is this:

And that means a private school, a religious school, a charter school or a magnet school. School choice also means that parents can home-school their children. Hundred percent. [source]

Almost all of the information we found about Trump was from his book, Crippled America, on Amazon.

Trump supports school choice. Trump wants politicians to let parents decide what schools are best for their children. Trump acknowledged that competition might mean the best and wealthiest students would be pulled from public schools and enroll in private schools.

"I guarantee that if you forced schools to get better or close because parents didn't want to enroll their kids there, they would get better. Those schools that weren't good enough to attract students would close, and that's a good thing."

Trump: the Department of Education should be limited or eliminated. page 54 of Crippled America.

Trump is against Common Core.

Common Core is a very bad thing. I think that it should be local education.

Lots of 'cutting' going on: source.

Trump has also claimed that the curriculum used in the public school system is "being dumbed down." Trump: Education has to be local. Common core means that Washington will tell us what we have to study. Source: Hugh Hewitt radio interview on 2016 presidential hopefuls , Feb 25, 2015.

It is not easy to figure out Trump's exact views on homeschooling. But it is clear that he is against giving so much money to finding public schools.

Trump's 'University' was a 'failure' and Trump was very involved.

"I'm deeply and actively involved in Trump University because I firmly believe in the power of education and its function as an engine of success. I want to help people, and, simply put, the Trump University students want to be successful. I'm on their side." [Source]

Trump wants to create vouchers for school choice programs. His plan includes homeschoolers. Trump wants to give $20 billion to kids who are trapped in failing schools. Vouchers could be used for any type of educational institution. What becomes difficult is how few homeschool families will qualify for this opportunity. Source.

Who are the people in poverty that qualify for Trump's funding? 2/3 do not have married parents. Over 60% of their parents do not have any form of higher education. The ethnicity of those living in poverty is 1/3 white, and 2/3 non-white. This is what Christopher Lubienski, a professor at Indiana University, said:

...these families are unlikely to take up homeschooling because of the “huge opportunity costs” involved even if the federal money might soften some of the blow. Single working parents, for example, are unlikely to give up their full-time jobs to stay home and educate their children in exchange for a few thousand dollars via Trump’s vouchers.

What does HSLDA say?

Homeschoolers have looked to the Homeschool Legal Defense Association for over 20 years for legal advice. It seems like HSLDA should be able to give us an informed opinion about each candidate's visions for homeschooling. The verdict? HSLDA has opposed both candidates.

The capstones and focal points of Clinton's education are strongly opposed by the HSLDA. They wrote a fairly detailed 5-point article about preparing for Hilary's policy.

“HSLDA opposes vouchers as they are not a free hand-out from the government and will regulate parental freedoms.” [source]

HSLDA has been strongly opposed to vouchers and even *preventively* called out Ben Carson. You can read more about that here.

The HSLDA has strongly opposed many aspects of Clinton's education policy. Nevertheless, there is no denying that the HSLDA strongly opposes Trump's plan as well:

HSLDA will continue to oppose any attempt by Congress or the executive branch to give government money to homeschoolers, because we believe this is outside the constitutional authority given to the federal government and government funds often carry stipulations that limit homeschoolers’ curriculum choices. [source]

What is a homeschooler to do?

If the HSLDA's opinion is worth anything, it looks like neither candidate is a clear choice. But we don't want to put forth any type of conclusion, we were just doing some education research. Tell us about your thoughts and opinions on social media: