Home » Articles & Blogs » Having Parenting Difficulties? Read "Hold On To Your Kids"

Having Parenting Difficulties? Read "Hold On To Your Kids"

Posted in Book Reviews, Parenting on October 1, 2016 - by Unschooling Mom 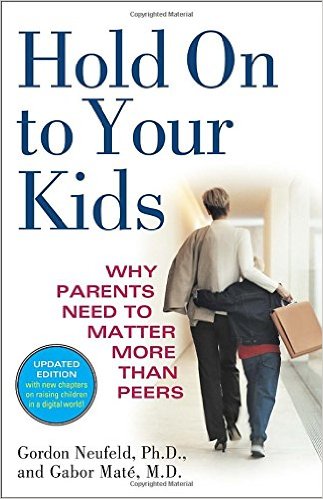 Book Review of Hold On To Your Kids: Why Parents Need to Matter More than Peers.

Gordon Neufeld and Gabor Mate, Hold On To Your Kids: Why Parents Need to Matter More than Peers

This book is an examination of the changing context of parenting and more specifically the difficulties facing today’s generation of parents. As the authors say, it is not that children’s needs have fundamentally altered, nor that parents have necessarily changed, but rather that the context and culture in which we parent has.

Before getting started, it's worth noting that my interpretation and opinion of this book are definitely influenced by the unschooling method and unschooling philosophy.

The main thesis, as the authors put it, is that the “disorder affecting the generations of young children and adolescents now…is rooted in the lost orientation of children toward the nurturing adults in their lives.” This is largely seen to be a product of the redirection of a child’s attachment relationship from parents, mentors and other adults towards their peers (known as peer orientation, a large-scale culture shift).

The results of peer orientation are visible everywhere. Suicide, violence, drug use, bullying and other antisocial behaviors all relate in some way to an attachment void between parents and kids. Peers are simply incapable of providing the mature guidance, unconditional love, connection and nurturing that children and teenagers require.

One thing that really struck me was the authors’ suggestion that what we in our culture see as independence is actually only dependence transferred. This is rarely acknowledged, but it is fundamental to our understanding of early childhood development. What may look like independence (being able to be content away from parents for long periods of time, for instance) is in actuality simply the child’s transference of dependence to their peer relationships.

Another key aspect of the book is the notion that parenting is a relationship, not a skill. Expert advice, parenting techniques and the like will all fail without connection. As the authors suggest, one must always strive for connection before correction. Time-outs, rewards and punishments and other tactics such as these become unnecessary when connection is present; for in connecting with our children we will know intuitively what is the right way to approach any given situation.

The authors also suggest that we shift our focus away from a child’s behavior and look at the relationship between parents and child instead. Instead of focusing on our child’s ‘behavioural problem’, we begin to recognize any challenging actions as indicators that something in our relationship may be amiss. Thus, rather than labeling the child or lamenting their antisocial or ‘oppositional’ behavior, we should instead be looking at our relationship with them. As the authors suggest, what we “label as behavioral disorders in individual children are really signs of societal dysfunction.”

Peer orientation leaves children vulnerable to peer exclusion, cruelty, bullying, and the like, made worse when there is no parental shield in place. Under these circumstances, children must begin to defend themselves against vulnerability from an early age, a tactic which in turn robs them of their ability to express themselves freely, to feel deeply and to explore the world around them with innocence and optimism. It also freezes them in an immature state, thereby disabling their ability to gain maturity (which in turn perpetuates a culture of youth).

I did really enjoy this book and I would definitely recommend it, especially to those parents in the midst of dealing with challenging behaviors or parenting difficulties seemingly related to a lack of connection or attachment.

I did at times feel that this book was a little overly nostalgic for the good old days. While a few generations ago the natural authority of parents was more easily assumed it was also often overly authoritarian.

On another note, I feel that the authors failed a little to acknowledge that many parents today are themselves a product of youth culture and peer orientation. As such, transmitting maturity may not be so easy to accomplish when many adults themselves seem to have been frozen in a form of immaturity.

You can see the book on Amazon.com by clicking here.