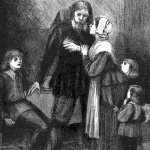 The Pilgrim’s Progress was a book for men and women; and it was aimed to teach the great truths of the gospel. For many years it has been in my mind, not to re-write the Pilgrim’s Progress, for that would destroy its greatest charm, but to change the words here and there to simpler ones, Read More »

The folks over at La Vista Church of Christ have made available some great illustrations from old Bible story books. These images are all in the public domain and may be used for any purpose! The collection is arranged by book- but it is not too hard to find what you are looking for. Go Read More »

You might recognize the name Xerxes from the Biblical story of Esther.  Historians are not certain whether the story refers to Xerxes I or another, later king of the Persian empire. Nevertheless Xerxes plays an important role in the history of the Middle East. The name of Xerxes is associated in the minds of men with Read More »

Three thousand years is a period of time long enough to produce great changes, and in the course of that time a great many different nations and congeries of nations were formed in the regions of Central Asia. The term Tartars has been employed generically to denote almost the whole race. The Monguls are a portion Read More »