This simple book was written for the purpose of introducing Navajo children to the English language.  There is a guide for pronunciation of the Navajo words at the end of the text. I think the most interesting part, however, are the illustrations: The simple black and white pictures show scenes of Indian life.  They would Read More » 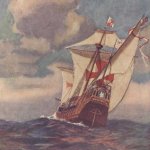 The story of Christopher Columbus is one of the most repeated tales in American history books.  However, many times the details are wrong, or assumptions are made about the man and his motives. To fully understand Columbus and his voyages, we must understand the culture in which he lived.  Christianity was the dominating philosophy throughout Read More » 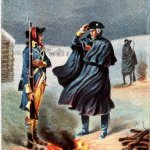 These old radio show episodes are fun to listen to and a great addition to any study of American history.  The point of the show was to try to guess which president was being “acted” out by the voice talent. Click to listen to the episodes online, or right-click “save link as” or “save file Read More »

Here are three nice e-books in the public domain about early American history.  All three are written in a narrative style- attempting to bring to life some of the most famous stories from the ages of Exploration up to the American Revolution. 1.  Builders of Our Country Description from the book: Of the narrative forms Read More »